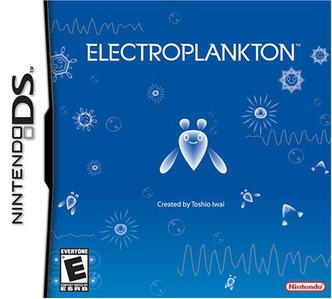 In my youth, I'm talkin' pre-teenager years, I was a devote follower of the Nintendo official webpage. It was very nearly the only webpage I ever visited. During this period, I could tell you every single game that was released for the Gamecube and Gameboy Advance and what games were about to be released.

E3 was something of a religious event because of this. Having no third-party sources (outside the Nintendo forums) as to what games were on the horizon, it was magical to see, at once, everything that developers were working on for Nintendo's systems. Some of the high profile titles appeared in the "News" section of Nintendo's site, but others were inconspicuously added to the so-called "Master Games List", a compilation of all the officially released and announced games for Nintendo platforms. A normal person would probably not notice a game slipping into this list. But I was no normal Nintendo fan, so it did not get past me when a peculiarly titled game, Electroplankton, appeared on this list.

In regards to what was out there in terms of mainstream video games, I really had seen it all at this point. This was the dark ages of publisher driven development. Outside of the indie market, you could categorize every game as one of several "types": the puzzle game, the 2D platformer, the 3D platformer, the Zelda game, and so forth. So, when I opened Electroplankton's entry in the Master Games List, expecting some sort of budget Spongebob action game, I was very intrigued. This was the first game I'd ever seen that I couldn't immediately classify under one of the labels I had subconsciously divised. It was different in a way unlike in any game I'd seen before. And the details were so sparse. I was intrigued and enamored. I didn't have a name for what it was at the time. I actually insisted that Electroplankton was a game when I firt heard of the age old art/game debate, but in hindsight I don't really know if that is a good label for it. But game or not, it is art. And it's impact on me has been quite possibly greater than any other single piece of art.

About 6 months after E3, the game was finally released...online. The big N was not convinced that the game would have wide appeal, and, as such it became the first game (to my knowledge) that Nintendo chose to do an online only release of. Being 13 at the time, I had no credit card to purchase the game online, but thankfully Target offered the game through its website, where I was able to purchase it using a Target giftcard.

I'll start my (over)(re)view with the packaging, which is quite unique. In Japan, the game was packaged with a pair of earbuds. Although I rarely played the game with headphones, the decision to include them was very smart. For one thing, headphones, no matter how crappy, are generally superior to the tinny Nintendo DS's speakers. I was impressed with the audio of the DS at the time, but really there is no comparison to headphones. The game also makes liberal use of stereo sound, and the effect is subtle through the Nintendo DS's speakers.

In the US, we didn't get headphones, but I do believe it was advised to play the game with them. We did, however, get the same beautiful box art. A single "Nanocarp" is featured in ontop of a shiny blue background. The smiling organism and reflective background is really calming and striking. It's too bad the game was not released in stores because I think a lot more people would've wanted to take a closer look at it from the cover art alone.

The back cover lists the 10 different "plankton" that you can interact with. They are listed much like songs on a CD. It's really a brilliant presentation in that it sort of sets your expectation of what Electroplankton is: not so much a game as an artpiece.

Unlike "art" games that preceeded (or proceeded) Electroplankton, there is no pretention at all here. For that reason, I defended Electroplankton's "game" classification for a long time. I still believe it is, in some sense, but it definitely doesn't feel like a game. But then, neither does it feel like its peers in the realm of noninteractive meida.

Electroplnakton makes no effort to guide your experience or, worse, feel some particular emotion. At no point will you feel that it's telling you how to play it. To put it as vaguely as absolutely possible: it is very much is what it is.

The "game" (I'll call it a game for the sake of this review), is divided into 10 different screens. Each screen contains one or more of a certain organism that the player interacts with via the touchscreen, microphone, and/or physical buttons. The menu selection is presented with each organism individually selectable via a simple two-screen display that provides a brief description on how to interact with the organism.

Each of the screens makes extensive use of the Nintendo DS's capabilities: touch screen, microphone, stereo sound. Almost every input of the DS's is responded to in some way by every Electroplankton. 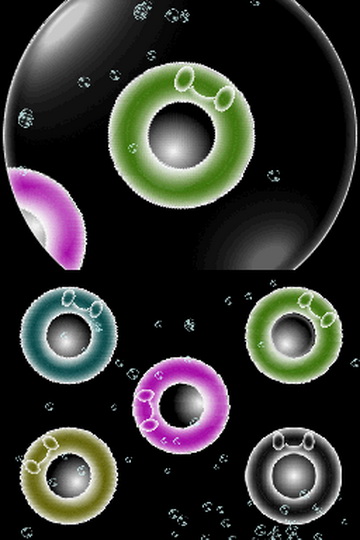 There are no objectives and no unlockables. Accustomed to the linear progression of virtually all traditional video games at the time, I was a bit phased upon first playing the game to realize this. I'd heard before playing that you can sort of make your own objectives. Hannenbow, for example, is a creature that is launched periodically from a leaf in the corner of the screen, ricocheting of another plant and producing sounds as it plunks its way to the ground. There is a "game" you can play wherein you adjust the leaves of a plant so that the Hannenbow ricochet of all the leaves before plunking back to the water. After enough Hannenbow do this, the leaves will all turn red and a flower will bloom. Upon playing Electroplankton, I quickly realized that this is the only thing that approaches any sort of objective. But that's just fine. In fact, I love that Toshio Iwai didn't feel the need to give players an objective. 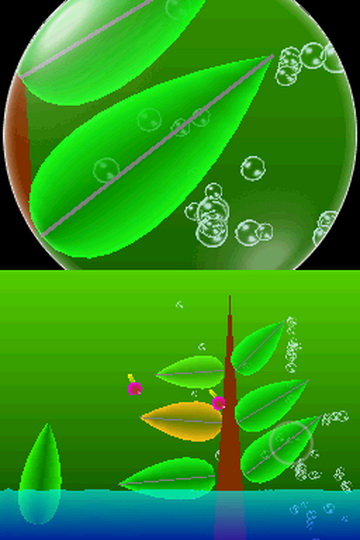 One of my the organisms I had most fun playing with was "Volvoice". Volvoice listens to the microphone input and mutates it depending on which shape it is, which can be altered by selecting one of the bubbles that surrounds it. While each plankton is unique and fun in their own ways, Volvoice was the one I had most joy with. The direct ability to interact with your own recordings leads to an experience that is exceptionally personal and compelling. There really was nothing like it at the time, and it remains one of the most memorable experiences I had with my Nintendo DS. 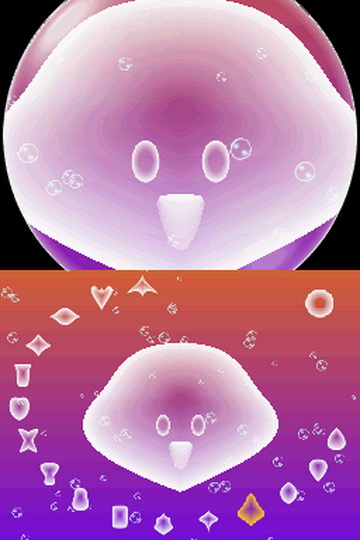 Another thing I really dig about Electroplankton is the ephemeral nature of the player's compositions. While you can find individuals online who have recorded their songs composed with the various plankton, the game does not lend itself to this sort of functionality. The reason is explained by Toshio Iwai in an interview with "Cubed 3". He says:

The first reason is that I wanted players to enjoy Electroplankton extemporarily and viscerally, and I thought if the save function was added, the software would become more like a tool. I did not want a play style where players have to open additional menus or windows, or have to input file names to save.

Which really says it all. I also think having a save functionality automatically puts pressure on the player to try to perfect their arrangements instead of just enjoying the game. This choice along with the indirect nature of the user interface makes for an experience that is incredibly relaxing and enjoyable. I think it shows immense thoughtfulness and discipline on Toshio's part as a designer to omit save/load functionality.

As promised, this was a very biased overview. Does Electroplankton have problems? I really don't think it does. In my eyes it was, and is, a revolutionary work of audio/visual art. I don't know for sure that successful indies at "thatgamecompany" were influenced by Electroplankton, but given the release date and style of Flow, I've always assumed they were. Still, I don't think the game was as influential as it should have been. In the age of art games and walking simulators, I still don't think any piece of art has achieved the magic that Electroplankton did in 2005.

Game or not, you must view Electroplankton as art when reviewing it. How you interpret it, and what emotions you feel playing it will vary from person to person. Give it a try!